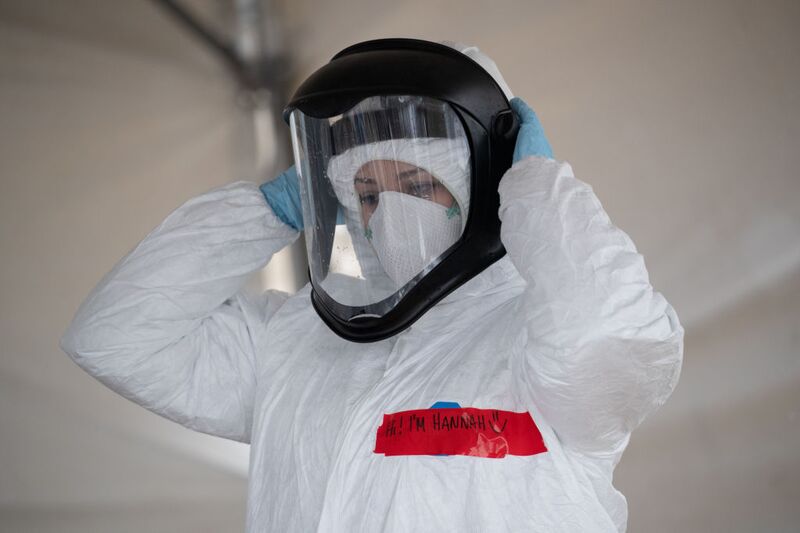 The coronavirus pandemic has exposed far more problems than just the for-profit health insurance system and its usurious practices. While it is true that sticking laid-off Americans with $100,000 hospital bills if they're hospitalized with coronavirus is not going to work out for anyone, and ditto for for-profit patent-protected vaccine and treatment development, there's a much larger problem that crippled the U.S. response to coronavirus, and it's one that main-stream media and so-called independents like The Intercept's (TI's) employees know not to get into: neoliberal trade policy and the offshoring of medical manufacturing to China and India.

We'll get back to Third-Rail issues for supposedly Independent media outlets shortly. In the mean time, we're all observing that the USA is having troubles getting all the supplies we need. Oh dear. . . You mean the neoliberal program to move all non-military manufacturing overseas to China and India in order to jack up Wall Street profits wasn’t such a great idea after all?

Here's what Buzzfeed News has to say about it.

China’s Hubei province is the epicenter of the global coronavirus outbreak. It’s also home to at least 12 drug plants supplying the US with everything from painkillers to antibiotics. And beyond Hubei, an estimated 80% of pharmaceutical ingredients are sourced from China and India (which, in turn, sources nearly 80% of its drug ingredients from China). Our ability to make and distribute medicine here in the United States is falling apart, and it’s a direct result of the consolidation of the supply chains and factories that make it.

Or, we can look at what Forbes has to say:

Imagine an even worse case if virus carriers are not identified and go out on the factory floor and infect others. This will be a nightmare. There are still a lot of unknowns about how the virus is transmitted, but the projections are pretty scary. The Chinese government and healthcare workers have mounted a heroic effort to stop the contagion. Let’s wish them the best and hope they can break the contagion cycle. But if you are dependent on a factory in China, this is going to hurt...

That’s from Jan 30, when it wasn’t so clear that the virus would spread around the world to Europe and the Middle East and the United States and Africa and South America. . . (how’s Antarctica holding out?). . .

Neoliberals are such greedy short-sighted morons, that’s how this debacle in the United States came about, the outsourcing program is precisely why we have the massive shortages of PPE and weak testing capability. And that is not China’s fault, the responsibility for that lies squarely with Wall Street and Washington DC.

But back to one of The Intercept's third-rails for a supposedly adversarial media outlet; It's clear its editor-in-chief is apparently under orders from the First Look Media overseers and their master, Pierre Omidyar, to squash any discussion of this subject, and the same is true of most all U.S. media. The ability to manufacture large volumes of personal protective equipment for hospitals, the ability to manufacture large volumes of test kits and supplies for a vastly expanded testing regimen ('surge manufacturing') - all crippled in the United State, because the manufacturers offshored it all for reasons of increased profits.

It's almost as if one of the goals in setting TI's "adversarial journalism" outfit up was to deflect progressive attention away from this fundamentally important issue, isn't it?

I mean really... ...some sites like Bloomberg allows discussion of this issue. What's with TI's editor-in-chief? Really not much editorial independence, I'm guessing. Really, you look into the Omidyar Network and First Look Media and the Intercept - Delaware shell corporations? Ebay is a Swiss company? One of the worst offshore tax evasion records of any Silicon Valley company? Bloomberg on offshoring and Coronavirus

It's obvious that even if you do Medicare for All, if you don't start thinking about medical supply chains the same way we think about, oh, military supply chains (not even the most ardent neoliberal trade enthusiast suggest we have Raytheon and Lockheed move their factories to China, right), it's not going to fix much - you'll still have critical shortages.

Of course, that would mean lower profit margins for the shareholders, for Vanguard and Blackrock and State Street, etc... Oh joy, capitalism.

Regardless of TI's author Risen’s obsession with Trump, the actual truth of the matter is that America’s for-profit health care system would almost certainly have flubbed the response regardless of who sat in the White House right now. There is simply no incentive for the neoliberal capitalist to invest in preparedness for a pandemic which may not come this year or even the next - the for-profit capitalist sees that as a loss on the books, right?

Storage of essential supplies? Domestic manufacturing capacity for tests and medical equipment for use in emergencies? Hiring epidemiologists and building clinics in poor neighborhoods? Developing vaccines for diseases that can’t be immediately turned into profits? That is all against the neoliberal, for-profit, capitalist ideology - yet Risen doesn’t even mention it?

In reality, medical professionals have been trying to warn the public about the risk of a pandemic exactly like this one, and have been ignored for years by successive administrations. Don’t think so? Go read this 80+pg report from Sept 2019, John Hopkins - nothing really new, just restating what people have been saying for 20 years, here’s the overview.

Look at their specific suggestions:

”Though there have been many medical advances since 1918 that would aid in a response to a high-impact respiratory pathogen event, were such an event to occur again, it would still have severe societal consequences. Today’s global population is more than 4 times greater than it was 100 years ago. In 1918, shipping played an important role in spreading influenza around the world, but today’s travelers can travel anywhere in the world in less than 36 hours, meaning that global spread would be likely to be far more rapid.”

The American health care system needs a complete overhaul and the basic for-profit model needs to be abandoned - hyperventilating about Trump is just a distraction, one that the corporate oligarchs will probably reward - because Biden’s plans are for more of the same. Is that the return to the status quo that Risen looks forward to? Sorry, that’s suicidal lunacy at this point.